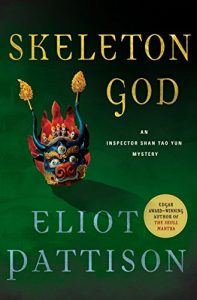 If you would know the age of the human soul, an old lama had once told Shan Tan Yun, look to Tibet. Here at the roof of the world, where humans were so battered, where wind and hail and tyranny had pounded so many for so long, it was a miracle the human spark remained at all. As Shan gazed at the old Tibetan herder beside him, knee-deep in mud, grime covering his grizzled, weathered face, and saw the eyes shining back with the joy of life, he knew that he was looking at something ancient and pure. In Tibet souls were tried, and souls were tormented, but always souls endured.

I could have used any number of passages from the Inspector Shan series to invoke the perseverance of the Tibetan spirit but this one paragraph seems particularly apt. It reflects not only the spiritual strength that shines through in these ruthlessly oppressed people but also the ability of Shan, the battered former gulag prisoner, to perceive, and celebrate, the miracle of that strength. As we slowly untangle ourselves from the shipwreck of this past year, we are well served by such lessons of human resilience. Far too many of us have emerged with anger, helplessness or melancholy resignation over the many ways events of the past year have disrupted our lives.

My entire Shan series, reduced to its essence, might be characterized as an anthology of human resilience. Many of my characters have suffered in unimaginable, though sadly authentic, ways. They have been cast out of their traditional homes and livelihoods, seen their families torn apart and even massacred, witnessed their culture being systematically destroyed and their temples, monasteries, and religious leaders annihilated. Like over a million Uighurs living to the north of Tibet, many of them have been virtually enslaved.

These are tragedies that have been repeated again and again throughout history, which teaches that nations and cultures don’t survive because they are somehow institutionally immune to such forces. Those that survive do so because of the strength of individual humans. The Tibetans endure because they consider the hardships that beset them to be just a passing storm. Even though that storm has persisted for decades, they have hunkered down and pressed on, their eyes still bright with that joy of life.

This resilience can’t be taught, can’t be mandated, can’t be accessed by clicking a social media button or listening to one more political speech. It has to be tapped from within. It is not simply a vital element of the human journey, it is the enabler of that journey. Ultimately this resilience is that of the human spirit. It is what has carried humans through trying times since we first climbed down from the trees. It is how people have risen up out of plagues, death camps, wars, and persecutions to push humanity forward. It saddens me to see how many seem to be waiting to be told how to deal with this tumultuous year, as if they have grown disconnected with their own spirit.. We deal with it like one more passing storm. We need to summon our inner Tibetan.