(In trying to make sense of a series of murders and thefts with an unexpected British connection Shan stumbles upon a strangely Western-style cottage hidden in the remote Tibetan mountains. He explores the perplexing interior of the old home) 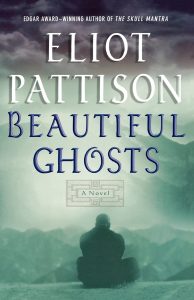 Under the photo on the fireplace mantel was a box with a glass lid displaying several medals and a calling card. “Major Bertram McDowell,” Shan read out loud. “Royal Artillery.”
“McDowell?” Yao repeated in a surprised whisper, and stepped to his side.
“The major was stationed at a trading post in Gyantse for a year,” Liya said over their shoulders. “He had always been a painter and a writer. In Tibet he began to compile material for a book, the first English book, on Tibetan art. When he asked to be taught as Tibetan artists would, a lama told him to sit in a meditation chamber with nothing but a Buddha for a week, that he had to expand his deity, let it reach his fingers.”
“A lama from Zhoka,” Shan suggested.
Liya nodded, still facing the photograph. “He never turned back after that week. He declined home leave, requested extended tours of duty. Eventually he resigned and the lama brought him here, where artists had helped the Zhoka monks for centuries.”
“Why would this place be so hidden?” Yao inquired.
Liya turned, not toward Yao but toward the little Buddha on the altar. “Study Only the Absolute,” she said.

Although this passage describes a fictional character, the army major from the early 20th century reflects the experience of many early visitors to Tibet. The British military excursion that brought the major to Tibet was not fictional, and the life of its leader, Colonel Younghusband, was changed forever by his experience at the roof of the world. Younghusband resigned from the army and dedicated his life to unifying the people of the world through religion.

I have long been fascinated by the way traditional Tibet released this spirituality in so many Western visitors. Was it simply that the isolation of the land, and the most remote, unique culture on the planet, somehow loosened inhibitions that had been bred into them? Was it because every Tibetan they met, whether government official, artisan or shepherd, was so intensely spiritual? Was it because the unimportance of material wealth in Tibet somehow shamed them, causing them to rethink their own ambitions? I don’t believe they were simply overpowered by the strangeness of Tibet, but perhaps they were stunned, and sometimes transformed, by the discovery of a world where no one hid their spirituality. Tibet, I believe, released instincts that had been suppressed by western culture. These aspects may well explain why, despite relentless genocidal efforts to crush it, Tibet has become something of a spiritual country that knows no borders.

Such tales reflect a questing spirituality within the human creature that has always been part of our journey. I believe, for example, that it was as much an element of Neanderthal cave art as the red ochre used by those ancient painters. I am convinced that this questing nature is in the human DNA, and although it may have been inhibited a century ago, today our shallow, instantly connected culture is virtually suffocating it. But ultimately it cannot be denied, at least not by those who seek to understand the long and amazing trek that led us to our current century. It was reflected in the placement of grave goods– a practice starting in Paleolithic times, just as it was in the way the ancient Egyptians translated mysteries of nature into animistic gods, and in the erection of stone circles and megaliths in so many ancient landscapes. Their particular quests took Zorastrians to the worship of fire, and Greeks to the construction of magnificent temples, further milestones in our passage.

Most cultures of our past never actually had a word for “religion.” Their belief systems were not some academic way of thinking, they were so intrinsic that they were the essence of these societies, and their people. I am not suggesting we should dissect any particular religion in search of new truths, but rather that we should recognize the vital importance of these spiritual quests in the human journey. Where are such soulful inquiries today? Those who speak of spirituality get mocked and negated with labels. When archaeologists study us in future millennia, will they conclude we worshipped our cell phones? I worry that many of us are detouring this path into a dead end. Perhaps it takes genuine courage to set aside our instant connections and pursue such quests today, and perhaps those quests will take us to new paradigms. We have learned from the sagas of our ancestors that it’s not about the destination, it is about the journey. Each of us must find our own way along that path, for we each have a different starting place, but the journey can teach us much about who we are, and perhaps help us better grasp the conclusion of the remarkable Jesuit philosopher-scientist Pierre Teilhard de Chardin: “We are not human beings having a spiritual experience. We are spiritual beings having a human experience.”