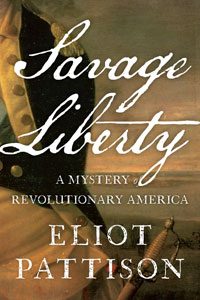 “…We are lost if you don’t recognize that everyone in this drama is in their ending times. All of us here. You try to convince yourself that you are different from us, but you are not. The life of your Highland tribe is gone, as is that of the Nipmuc, and the Abenaki and soon the Iroquois. But it doesn’t stop there. The Jesuits have glimpsed their ending. They may be desperate, but they have more power than you think.”

“Only the kings survive,” Duncan said after listening to the owl again.

“No. You are wrong,” his old friend replied. “There is an ending time for them too. King George has America, King Louis thinks he can get much of it back. But they don’t know the people who have taken root here. Those people are beginning to grasp the truth that the tribes have always known. Nothing important in life has ever been granted by a king.”

Conawago shifted his gaze back over the silver-gilded mountains. Minutes passed before he spoke again, in a slow, reverent voice. “There is no land like this land,” declared the old Nipmuc, who had seen more of the world than anyone Duncan knew. “There is no freedom like this freedom.”

One spring years ago I hiked over five hundred miles of the Appalachian Trail, alone, immersed in the natural world for several weeks. I experienced nature in ways I never had before, and as the days, and the mountains, passed by, I realized the wilds were strengthening me in aspects beyond the physical. I began to recognize an unfamiliar connection with the planet that to this day is still difficult to put into words. It brought an empowering sense of freedom but also a calm confidence, and deep gratitude for the endless beauty that surrounded me.

Those who have read my Bone Rattler books know that I endeavor to integrate the natural world into my tales. I have gone so far as to observe that the land itself is a character in those novels, and I am convinced that it played a profound role in shaping the American identity. I believe this phenomenon is not unique to our continent but has been present throughout human history, and cultures which have grown heavily urbanized and “tamed” all their lands, cutting themselves off from nature, have paid a price that has been little explored by historians and anthropologists.

The above exchange between Duncan and Conawago seeks to capture this dynamic, reflecting the wisdom of a long life rooted in both European and indigenous traditions.It is difficult to wrap words around this influence of nature but the quiet eloquence of the old Nipmuc at least offers a glimpse. “There is no land like this land,” Conawago declares. “There is no freedom like this freedom.” Those words could have been the motto for the American Revolution, although “nothing important has ever been granted by a king,” might have served equally well.

That land, that freedom, and that beauty is still available to us, and experiencing it can still be a powerful source of personal growth. Humans are more disconnected from their history than perhaps ever before. If you want to get closer to your ancestors, don’t just dig into books, venture into the wilds.