(Inspector Shan arrives at the 404th People’s Construction Brigade on a rare family visitation day to spend time with his son Ko, a prisoner in the hard labor camp) 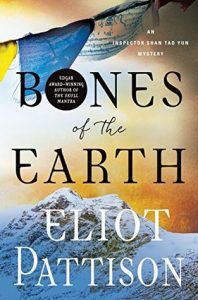 Ko was no longer counted among the high-risk prisoners, so he was not chained to a chair for the visit but rather allowed into a side yard, enclosed with razor wire, with other prisoners and their families. Mothers and wives wept. Fathers and sons clenched their jaws and tried not to glare at the armed guards as the thin, ragged prisoners filed in, some supported by other inmates. Half a dozen prisoners, the oldest, never had visitors but were allowed to sit at the perimeter and contentedly watch the brief, tearful reunions. The families of hard labor prisoners never knew whether a loved one would survive to the next visit. More than once Shan had seen family members collapse, sobbing, as they were greeted not by the prisoner they had come to see but by a certificate attesting to his death.

All of my Inspector Shan novels offer glimpses of life in the prisons, labor camps, and compulsory reeducation compounds that abound in the traditional lands of Tibetans and Central Asian Muslims now controlled by Beijing. Not infrequently readers suggest that I have exaggerated the severity of these sites for dramatic effect. No, I reply, my depictions are painfully authentic, reflecting the brutal intolerance and often nightmarish conditions that exist at such places. I am fastidious in researching these and other background elements that are reflected in my pages. Never in the history of the planet has such jack-booted repression been imposed so widely and so severely, made all the more ghastly by the fact that it is based not on criminal behavior but simply on culture and religion.

These tragedies make for poignant passages in my novels, some of which were painful to write precisely because I well understood their authenticity. I have been humbled to be able to present heroes in this shameful chapter in our human journey, and appalled to discover how the repression grows more severe with each passing month. Increasingly I am also appalled by the callousness of the West toward the treatment of the Tibetan and Muslim inhabitants of western China. The entire land of traditional Tibet has for all intents and purposes been transformed into a prison for Tibetans, whose freedoms have been systematically crushed. In Xinjiang province, millions of Muslims suffer harsh involuntary servitude, many of them forced to produce materials that are required for high technology products sold by China to the West. Most of our self-styled human rights advocates are quick to throw tantrums over high school bathroom signs but remain silent about these shocking violations of basic human rights in Asia. They prefer to shout about issues that will garner them the most social media attention, not issues of abject inhumanity. Ultimately they have grown more spiteful than compassionate.

This too is part of our human journey, which has never been a universal march toward goodness but rather the uneven path worn down by the struggle between ignorance and enlightened compassion. Nowhere in human history has this struggle been reflected more vividly than in Tibet during the past two generations, and tragically the experience of Uyghur Muslims is rapidly catching up with that of the Tibetans. I recall how in another century the citizens of our northern states were slow to act against southern slavery, in no small part because that particular servitude was vital to the supply of cotton for their fashions and tobacco for their smoking pleasure. Today that same hypocritical syndrome supports the horrific servitude in Asia. Apparently we can tolerate a few million slaves on the other side of the world so long as they keep up our supplies of cell phones and solar panels.